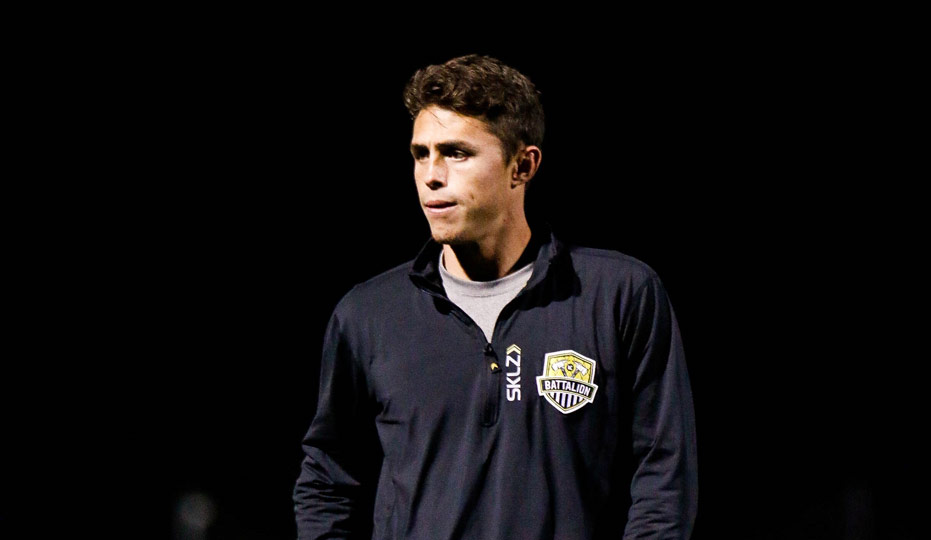 Nate Abaurrea sat down with NC Battalion Head Coach Ryan Guy, for the latest edition of our Coach’s Corner Series. The Battalion are at home to SC Corinthians USA on Saturday night, their sixth match marking the halfway point of NPSL Southwest league play.

Nate Abaurrea: “We’ll get to the team in a second. How are you feeling, coach?”

Ryan Guy: “Nate, I’m feeling pretty good. I think my feelings kind of mirror those of this team at the present moment.”

NA: “You care to elaborate on that?”

RG: “It’s the meat of the season. It’s the grind. Nobody’s feeling 100%, and that’s no different than any other football team in the world that I’ve ever been a part of at this time of a season. Everything’s week to week right now. We’ve got injuries and issues to address, the same as every other team in our conference. I’m in 4th gear, and I’m ready to hit the highest gear I’ve got as a coach. The players feel the same way. I think we’ve been putting in a lot of good work in training recently, and we’re about to see the fruits of our labor.”

NA: “I’ve noticed an added intensity in training of late. What’s it been like from your view?”

I’m definitely not gonna name any names, but I have no problem telling you that there was a little scrap at training the other night. It was nothing crazy, nothing out of the ordinary for anyone that’s ever played or coached this game. It was men being men, competitors in preparation for their next battle this weekend. It was all handled that night, and we are better for it now.

We want everyone to be better, and be constantly working to get better. That’s what it’s all about. We expect more from ourselves than what we’ve given thus far in the league. A fire has been stoked, there’s no doubt about it, and we need to make sure it translates to the pitch on Saturday night.”

NA: “It’s been over a month since your last win in the league. Forgive the hyperbole, but this is certainly a must-win for your side, wouldn’t you say?”

RG: “Yeah. Welcome to football.” (laughs) “In this situation, we’re not letting anything other than the fact that we need to win come into our heads. There’s excitement right now. We’re getting better. I can see it and feel it. I’ve been on plenty of teams that have peaked too early. I want to believe that we are gonna be peaking at right time. We better be. This match is part of that process.”

NA: “Taking that concept of ‘peaking too early’, and applying it to individual matches, some folks in San Diego have said that your team has developed a reputation for ‘2nd half meltdowns’, most recently against Temecula, when the Battalion lead 2-0 at home, only to lose 3-2. What’s it gonna take to prevent what we saw two weeks ago against Temecula from happening again against Corinthians?”

RG: “It’s a great question. We’ve put an emphasis on the way that we’re gonna be playing out of the back. Building our attack from the back forward. I feel like the issues you cite have been a mixture of fitness and lack of understanding our roles. Rest assured, we are working extremely hard on our fitness. Every player will tell you so. We need guys to last 90 plus, while also working heavily on knowing our roles. The mixture is there. Certain things needed to be tinkered with, and depending on how the first half goes against Corinthians, we might make more changes. That is a luxury of the NPSL rules, the flexibility we are afforded. However, that is not to say we aren’t confident in our game-plan. We are ready for Saturday.

NA: “So you and your staff have indeed shifted things a bit, tactically speaking?”

NA: “Your answers have gotten a little shorter for these last few questions.”

NA: “How about the opposition. What do you and your staff know about these guys?”

RG: Corinthians USA are an interesting team. They play a typical Brazilian style, modeled after their namesake, one of the finest clubs in South America. I’ve actually spoken with a number of people from around the league about them. Some very knowledgeable minds have said that they are a little bit more of a footballing team than others, meaning they want to play the beautiful game, and put the emphasis on attacking. Their results haven’t necessarily reflected that as being successful, but I’ve seen some of their games. They are dangerous, but I like this affair, and the congruent styles matching up with one another.”

NA: “There’s a log jam in the NPSL Southwest right now. Albion are on top, but drew at home last weekend against So Cal SC. Beneath that, everybody’s about even. How do you feel about this league?”

RG: “I think it’s getting younger and faster. The speed of play is quicker, and becoming more like the style of Major League Soccer. The physicality, the quick transitions… Maybe it’s not the best possession football on display right now, but that’s not a product of poor control. I feel like it’s a product of young players with hunger. The older guys now have to adapt.

There’s parity now like there’s never been before. Every team can beat every team, and that’s only gonna help everyone in the future as we send teams into the US Open Cup and whatever other battles come into play. I’m happy, for what it’s allowed us to experience. I don’t want to play or coach in a weekly walk over league with sub-par teams. The NPSL Southwest Conference is asking us questions, and that’s the only way you’re gonna get better as a team and as an organization, to be asked those questions. And because this season is so fast, well, you better be able to answer those questions quickly and assertively.”

NA: “Time for the good old ‘3 Keys to Battalion Success’ for Saturday night.”

“1. Penetration in the final third.

I’m excited to see Cheezy (Adam Meltz) against Corinthians.– We want to have a plan as a team, but we want to be unpredictable. He’ll be one of the primary weapons of unpredictability to help us win.

2. Composure in the 2nd half

We’ve already spoken at length about this. We know what it’s gonna take.

We need it from every last man, but I also look at Nelson Pizarro as a major factor in this. With his experience and talent level, he can do so much for this side. When you see a professional like him exhibit raw passion, it can spread quick. We need that.”

NA: “Gates open at 6 o’clock on Saturday night, with kickoff at 7. Any final words from you to the Battalion supporters?”

RG: “These are the games that define seasons, when you need a win. These are games when the 12th man truly comes into play. I look at this game almost as a do-or-die type encounter, and I don’t say that to add any pressure on our team. The guys know this. We always play to win, and every game is important. But the performance of the players on Saturday night can most definitely be boosted by feeling the gravity of this situation we’re in.

We want you to have that same feeling. We’re in this together. This is a big match for you. We want you to bring the noise for 90 minutes. We want to let the other team know where they are, and that’s not at home. I can’t wait to see you on Saturday night.”