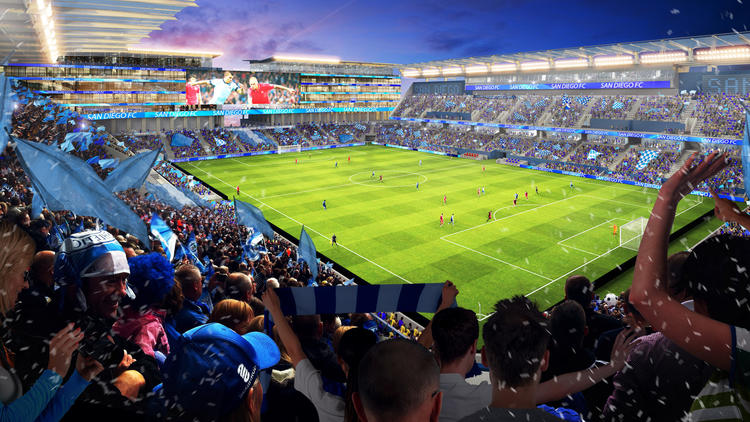 At a press conference held in La Jolla on Monday morning, details about San Diego’s long-rumored Major League Soccer bid were revealed. A single image was released, depicting a raucous crowd cheering for “San Diego FC” while waving white and blue flags and scarves. FS Investors, an investment group with offices in San Diego and San Mateo has the exclusive bidding rights to apply for a Major League Soccer franchise, have yet to complete the final details, but the proposition includes several points:

The deadline to apply for MLS expansion is in just a few days, January 31st to be exact, and there is no time for this proposal to go to a vote before this opportunity to add a major professional sports team passes by. The league only has a finite number of expansion slots remaining, and there are several markets around the country much further ahead than San Diego in the expansion process.

Don Garber, MLS’ Commissioner is due in San Diego this week for the United States Men’s National Team match against Serbia on Sunday, and Monday’s announcement comes at an important time as the nation’s soccer community turns its attention towards San Diego. Garber has previously indicated the league’s desire to plant a team in San Diego, and acknowledged that the time has never been better for MLS in San Diego.

“What it’s really about is that we seem to do better in markets that have less competition. And that obviously makes sense. It seems as if when a team leaves, there’s a void that fans and the community overall and politicians feel, and MLS can come in and in many ways try to fill that void. We have spent a lot of time down there,” Garber said to reporters at the MLS SuperDraft. “There is a very good group that’s come together. We know the investor prospects well. I’ve been there quietly probably two or three times. I’ll be down there for the [US national team] game. I think it would be a great MLS city.”

The League is in. The ownership is in. What needs to happen next?

It would seem as though all that remains is for City Counsel to vote to sell the land to FS Investors. Voice of San Diego CEO Scott Lewis believes there is potential if San Diego State throws in alongside FS Investors:

@DikeNatsai if SDSU gives it full support, it’s got a strong chance IMO.

SDSU spokesman Greg Block acknowledged that the university has received a proposal from FS Investors, but that they have not decided one way or another how to respond.

“It’s worthy of continued discussions,” he said. “I don’t think we’re ready to put anything anywhere — we’re not committing to anything right now. We are committed to playing football,” he said. “There’s lots of things out there we’re looking at.”

Could SDSU opt to move forward without aid from FS Investors? Quite possibly. The question is, will they?

Newer Post
Seven California Players Named To U.S. U-18 January Camp
Older Post
Around the World With a Six Pack