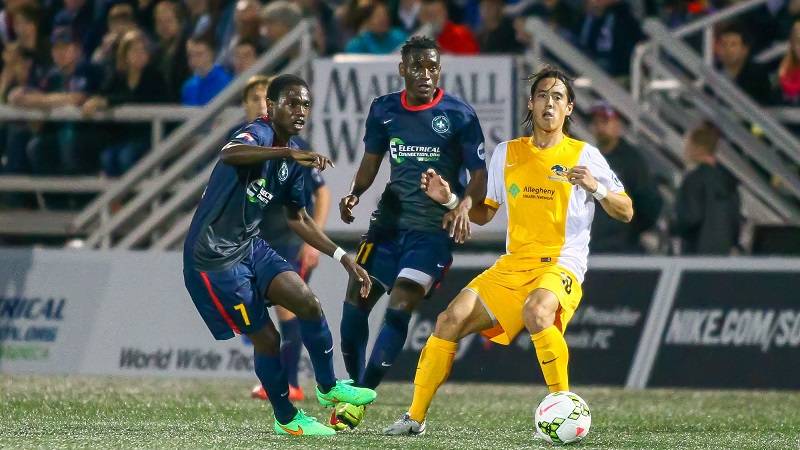 TAMPA, Fla. – Newcomer Saint Louis FC was enjoying a second-half lead during its home opener earlier this year, only to see the Pittsburgh Riverhounds snatch an equalizer and a road point.

The Eastern Conference rematch is set for Saturday at Highmark Stadium, where the Riverhounds last did the unthinkable last week with three late tallies to win a 6-5 shootout against the Harrisburg City Islanders.

In Western Conference action for Week 12, Orange County Blues FC faces the LA Galaxy II in a southern California derby. They meet in back-to-back games and are also side by side in the West standings.

GAMES TO WATCH
Pittsburgh Riverhounds vs. Saint Louis FC
Saturday, 1 p.m. ET, Highmark Stadium
Pittsburgh tipped the drama scale last time out with an action-packed 6-5 victory against Harrisburg last Saturday – the highest-scoring regular-season game in USL history. It was the third time this season that the Riverhounds (4-3-3) have scored five or more goals in a game. Rob Vincent and Danny Earls earned USL Team of the Week honors for their efforts, and league goal-scoring leader Vincent (8 goals) earned Player of the Week. Saint Louis (3-3-3) is seventh in the East, just below the playoff cutoff point, but the club is a respectable 2-1-1 on the road in its first season. This is the second and final meeting between these two teams in regular-season play, after playing to a 1-1 draw the first time out at World Wide Technology Soccer Park. Saturday’s game was originally scheduled for 2 p.m. ET but was pushed up an hour.

Colorado Springs Switchbacks FC vs. Vancouver Whitecaps FC 2
Saturday, 9 p.m. ET, Sand Creek Stadium
Vancouver (3-4-4) has quietly moved its way up the West standings, piecing together a four-game unbeaten streak (2-0-2) after most recently earning a 2-2 road draw against Real Monarchs SLC. WFC2 nearly pulled off the victory on a late Andre Lewis goal, only to see SLC find the equalizer in stoppage time. Caleb Clarke, who scored Vancouver’s opening goal, has been the team’s most consistent weapon with five goals, and has scored in each of WFC2’s last three contests. Colorado Springs is 2-1-0 at Sand Creek Stadium this season, outscoring its opponents by an impressive 11-4 margin. Establishing a home-field advantage will be important for the Switchbacks who will play five of their next six matches at Sand Creek.

Orange County Blues FC vs. LA Galaxy II
Saturday, 10:20 p.m. ET, Anteater Stadium
The Blues and Galaxy II prepare for back-to-back derby matches during the next two weeks, and quite a bit is on the table with Orange County third in the Western Conference and Los Dos right behind in fourth. The Galaxy II have won five of their past six games, rallying for a 2-1 victory against Colorado Springs Switchbacks FC last week. Raul Mendiola, the league’s leading assists man with seven, took matters into his own hands with the game-winning, stoppage-time tally. Orange County had a mixed-bag May from a results standpoint, capping off the month with a 1-1 draw against Seattle Sounders FC 2. The Blues will be without the services of defender Josh Suggs, who received a two-game suspension after a red card against S2. On the flip side, Orange County added to its back line with this week’s signing of Nikola Paunic, a fourth-round selection by Vancouver Whitecaps FC in the 2015 MLS SuperDraft. Saturday’s kickoff time has been pushed back to 10:20 p.m. ET to accommodate a pre-game ceremony.

NEWS AND NOTES
– The Charlotte Independence added to its roster on Friday, including goalkeeper Michael Lisch who is on loan from Major League Soccer’s Houston Dynamo. The expansion side also signed defender Jonny Campbell.

– Seattle Sounders FC 2 (6-3-2) looks to maintain first place in the Western Conference when it hosts Tulsa Roughnecks FC on Friday at Starfire Sports. Seattle leads the league with five home victories and has yet to drop a point at Starfire. S2 has outscored its opposition 15-5 at home.

– The Charleston Battery (6-1-4) trail the East-leading Rochester Rhinos (7-0-4) by three points entering the weekend. Rochester is idle this weekend, which means Charleston potentially can tie Rochester in points with a victory against Wilmington Hammerheads FC on Saturday at Legion Stadium.