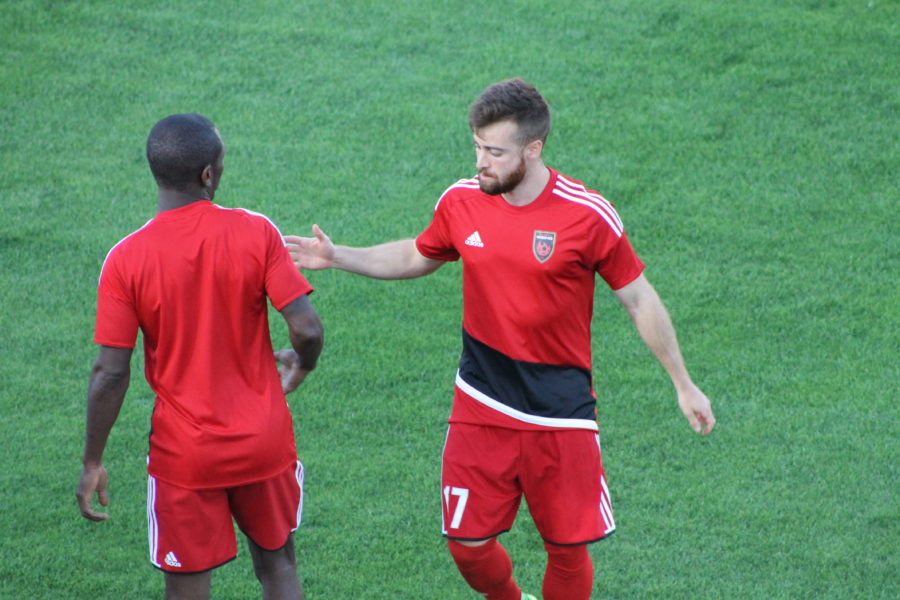 Phoenix Rising FC notched its first win of 2017 Saturday night, defeating LA Galaxy II by a score of 2-1. An announced crowd of 6,330 saw Rising come back from 1-0 down in the second half, behind a brace from midfielder Luke Rooney.

Alessandro Riggi, so active in his previous substitute appearances, got the start for the hosts, and made an immediate impact. In the 5th minute, the former Canadian youth international dribbled all the way to LA’s six-yard box before squaring to Omar Bravo, who couldn’t quite turn the ball on net.

Riggi impressed all night with his speed and 1v1 touches. His minutes had been limited due to fitness and a short preseason, but he was ready for Saturday’s strong outing. After the match he said, “I’m feeling right, and when I’m feeling right it’s dangerous for the opponent, so it’s good.”

In the 12th minute, Victor Vasquez looped a scintillating cross from 35 yards that found the head of a diving Omar Bravo, but the shot went directly at a grateful Jon Kempin.

Rising would continue to push up the pressure, with Shaun Wright-Phillips rattling Kempin’s crossbar off a 22nd-minute rocket from outside the box.

In the 27th, LA got its first pair of decent chances on the night, but one cross dribbled harmlessly across the face of Josh Cohen’s Phoenix net, and a nice run and cross by Tyler Turner was cleared by a sliding Jordan Stewart.

At the other end, Rising FC’s Peter Ramage got a head on a corner in the 35th minute, but put the ball over the top.

Shortly thereafter, LA’s Raul Mendiola, a stalwart throughout the short history of Los Dos, was left alone near the top of the Phoenix box, and ripped a curling shot that tested Cohen, but was saved.

Rooney gave the crowd a thrill when, in the 45th minute, he connected with a Bravo corner kick, and sent a half-scissor volley just wide of Kempin’s net.

Phoenix dominated the first frame, but LA’s ability to counter was evident throughout, and the visitors looked a step faster in the second half with the insertion of first team loanee and former Los Dos star Ariel Lassiter. In the 52nd minute, LA captain Ryo Fujii played a ball into the box where Stewart was racing to intercept it. The Phoenix defender stumbled, however, tapping the ball into the path of Los Dos striker Adonis Amaya, who beat Cohen for the 1-0 lead.

Galaxy II head coach Mike Muñoz was impressed with his young squad’s performance, noting the progress that the system has made in its three years. “This is a new cycle for Galaxy II,” he said. “The majority of the players have graduated to the first team, which is the whole point. So now it’s the whole second group, second process for these young guys.”

LA would get a few more opportunities, but Phoenix would equalize in the 61st, when Rooney put away a euphoric penalty kick, to the uproarious delight of the home faithful. The penalty had been awarded to Bravo, who was taken down in the box by LA’s Adrian Vera. The goal was the club’s first at Phoenix Rising Soccer Complex, and first overall since rebranding last November.

Not satisfied with a draw, Rising FC continued to press. Rooney was sprung in the 78th by a lovely ball from Bravo, took a touch to his right, and shook three trailing LA defenders before beating Kempin again, this time to seal the win.

The historic night was extra special for Rooney, one of the holdovers from the squad that showed flashes of brilliance in 2016, but fell well short of the playoffs. “To be honest I was just relieved I put it in the net because so much work has gone into everything here,” he said. “If you look at what the people at the club have produced, and the first night (against Toronto FC II) was bitterly disappointing and hopefully tonight has gone a ways to make up for that.”