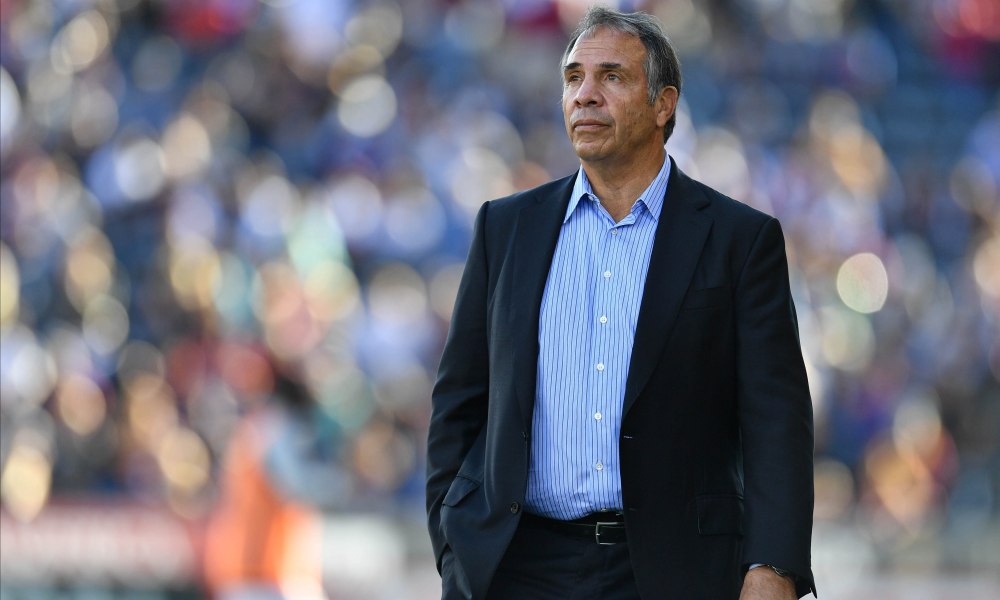 One Step Forward, Two Steps Back: The Return of Bruce Arena

U.S. Soccer is becoming comparable to the movie Groundhog Day.

With the frenetic free-fall of Jurgen Klinsmann in recent weeks, it was clearly a necessity to find a fresh face to take the reigns of the United States Men’s National Team. Instead, USSF President Sunil Gulati and his staff have gone with a familiar face and familiar ideas, looking to a man who has been in this position before, in more ways than one.

The last time the U.S. team was in as deep of a rut as it currently finds itself in, it was a gentleman by the name of Bruce Arena who came to the rescue.

The year was 1998. The U.S. was fresh off the most miserable of performances at the World Cup in France, a showing that officially went down as 32nd place. Head Coach Steve Sampson, the great admirer of Brian Maisonneuve and the mastermind behind the 3-6-1 formation, was justifiably relieved of his duties. (Imagining some of Sampson’s most egregious France 98 related mistakes being made in this day and age, with the same level of media scrutiny that was shown to Klinsmann in recent weeks and months, is enough to make you cringe a bit.)

The federation looked to the man who had just guided DC United to the first two MLS Cup titles, coming one last win against the Chicago Fire short of a three-peat. His name was Bruce Arena. Earlier that year, Arena guided DC to winners medals in the 1998 CONCACAF Champions Cup, beating Toluca in the final.

In Arena, they had a bullish manager who was willing to wring the sponge of American soccer in order to get the best possible output from whatever was at his disposal. They had a manager that at 47 years of age possessed a finely balanced blend of exuberance and experience. They also had a guy who doubled as a lacrosse coach for a significant period of time.

Prior to the launch of MLS, Arena had a storied college soccer coaching career at the University of Virginia. In eighteen years he collected five national championships. Perhaps the more notable accomplishment was the talent he helped to develop, some who would go on to become U.S. World Cup veterans. The likes of John Harkes, Claudio Reyna, and Tony Meola all suited up for Arena at Virginia.

On the earliest of touchlines of his U.S. tenure, Arena was helping to rapidly change the vibes and culture of U.S. Soccer in a positive fashion.

A 3-0 win over Germany in February of 1999 was looked at as a launching pad for what was to come. Though it was in a friendly in front of an over half empty stadium in Jacksonville, the result was a big one for the players and coaching staff. A three goal blitz in the first half from Jovan Kirovski, Tony Sanneh, and Claudio Reyna saw Bayern Munich and Germany goalkeeper Oliver Kahn in disbelief. (Kahn would of course get his revenge against Arena and the Americans three years later at the World Cup in South )

There was suddenly a confidence around the camp, as well as a competitive desire that had clearly been missing in the final days of the Sampson administration. The qualifying cycle was by no means a squeaky clean streak. (Cue flashback to a must win in Waterford. Waterford? Oh yeah, it’s in Barbados. November 15th, 2000. Look it up. It’s wild. A suspended Bruce Arena, who’d gone Earl Weaver on a match official a few games earlier, watched from the stands in a rain soaked stadium. A game they had to win just to get to the hex. It’s the pinnacle of American soccer hipster matches of the modern era, a deep cut off a forgotten album.)

The U.S. still went into the 2002 World Cup a chipper bunch, a group willing to give every ounce of energy and passion for the benefit of the team, for the coaches, for the fans, for the country. There was an old school vibe, mixed with the right amount of youthful and invigorating presence.

The team’s performance in that tournament is without a doubt the greatest achievement in U.S. Soccer history. From the opening game win against a heavily favored Portugal side to the iconic 2-0 win against Mexico (a game that saw Arena make a surprising and audacious switch to a 3-5-2 and the addition of Josh Wolff to the lineup, decisions that paid major dividends), all the way down to the final whistle of a gut-wrenching (some would say unjust) 1-0 loss to Germany in the quarterfinals, the plucky U.S. team showed a level of strength and courage that garnered attention and respect from around the world.

Four years later, the culture had changed again,and not necessarily for the good. This time around, people were falsely looking at the U.S. team as a squad that was on par with the world’s elite. A deceiving and outrageously high FIFA ranking combined with the decision of multiple major media outlets to market the 2006 World Cup to casual sports fans as opposed to a soccer specific audience played a part in heightened, and borderline unfair expectations for the team’s performance in Germany that summer.

The Yanks were drawn into arguably the toughest group in the tournament, alongside the Czech Republic, Italy (who would go on to win the whole thing), and Ghana. To knowledgeable people who had been around U.S. Soccer for years, the group was a daunting task to say the least.

An opening match thumping at the hands of the Czechs was the beginning of the end for Arena, who had already become the first U.S. Manager in modern history to be at the helm for two separate World Cup cycles. That 3-0 loss saw a number of tactical faux pas from the American coach, and a collective wake up call to every member of the squad.

The U.S. came out the next match and put forth one of the most spirited displays of the entire tournament, a 1-1 draw with Italy in Kaiserslautern that featured the iconic-yet-gory image of Brian McBride’s bloody face. It was a downright nasty contest that saw three red cards, the U.S. playing most of the second half with just nine men to Italy’s ten. A late DaMarcus Beasley goal was ruled out due to McBride being offside, and the Americans had to settle for a draw, the only game the Italians didn’t win at that World Cup.

You could look at this match against Italy and the 2002 loss to Germany as microcosms of Bruce Arena’s U.S. coaching tenure. They were both filled with heart and pride, but heart and pride can only get you so far against the world’s elite. 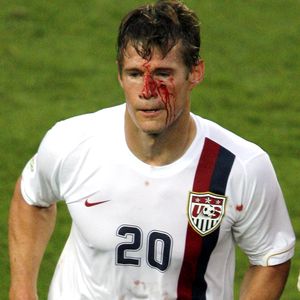 The final game of Bruce Arena’s tenure was an American debacle. Needing a win against Ghana to advance (as well as help from Italy against the Czechs, which the U.S. so ungraciously received), Arena inexplicably played an extremely conservative 4-5-1 formation. Though some bounces and close calls went against them, the U.S. lost 2-1 in a deserved result. They were knocked out of the World Cup, winless in three games, just one point better than they were in 1998.

Arena was relieved of his duties in the weeks that followed the U.S. team’s return home.

Following a brief spell with the New York Red Bulls, Arena ventured to the sunny seascapes of Southern California, taking the head coaching job with the Los Angeles Galaxy.

It seemed the perfect fit for Arena. He spoke of his gratitude to live the quintessential So Cal lifestyle, finding immense pleasure in seeing the ocean everyday. He still had something to offer as a coach. And as the head honcho with the Galaxy, he would be served up a revolving buffet of winning options that almost guaranteed success domestically.

In his time in L.A., Arena won three MLS Cups, actually showing an intriguing bit of diversity in style while managing a star studded cast of characters from David Beckham and Landon Donovan to Robbie Keane, Steven Gerrard and Giovanni Dos Santos.

While certainly a fine accomplishment, the winning of MLS Cups means little to anyone around the soccer globe. The USSF looked to Jurgen Klinsmann, a legend and World Cup winner as a player, as a middle-man to the men’s national team’s pathway to true and consistent global relevance. Let’s just say that was poorly thought out and didn’t exactly go according to plan.

And now, over ten years since his sacking, when his well of ideas and tactics had clearly run dry with the national team, Bruce Arena is being handed the reigns again. A man who held the post for almost eight years, nearly three years longer than Klinsmann, is being blessed with an opportunity to pursue personal redemption at the age of 65.

Some are calling it a “stop-gap” or “band-aid” solution, Arena simply being tasked with climbing out of the hexagonal basement and assuring qualification for the 2018 World Cup.

Some see Arena’s return as a benediction to a team currently bereft of any kind of cohesion or camaraderie. His leadership and ability to get the most out of whatever talent level he has around him should be applauded, and should definitely give a bit of hope to U.S. fans come late March and the return to World Cup Qualifying with a home match against Honduras and a road fixture in Panama.

Others see his appointment as a clear cry of a collectively clueless mind, aka the brain of Sunil Gulati and the rest of the men atop the federation food chain. Some folks have been quite outspoken in their criticism of Arena’s rather primitive view of dual-national players suiting up for the United States, as well as his lacking of any sort of modern footballing strategy. He has been labeled by some as a relic who is downright archaic as a tactician.

A handful of currently relevant narratives are eerily similar to those of yesteryear. Much has changed since Bruce Arena first assumed the title of Head Coach for the United States. Things like the comparative quality of the national team on a worldwide level? Highs and lows have evened out. Those things haven’t changed much at all since the final years of the last millennium.

The ties with Klinsmann have been severed, both as Head Coach and Technical Director. The helicopter is flying away. You can rejoice if you choose, but just know that Klinsmann’s departure means little in terms of the overall talent level of the national team, and the flaws within our systems of player development. But it was time for a change, as well as a sharpening of the swords before a hexagonal hole was dug too deep.

The door to the time portal has been opened. Set the clocks back to Bruce! 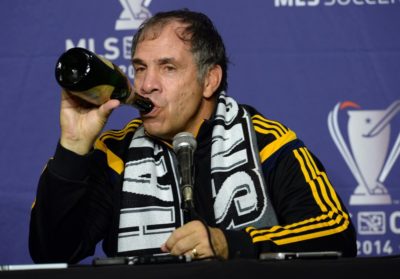 Crack open something strong, because tonight we’re gonna party like it’s 1999… in Jacksonville.