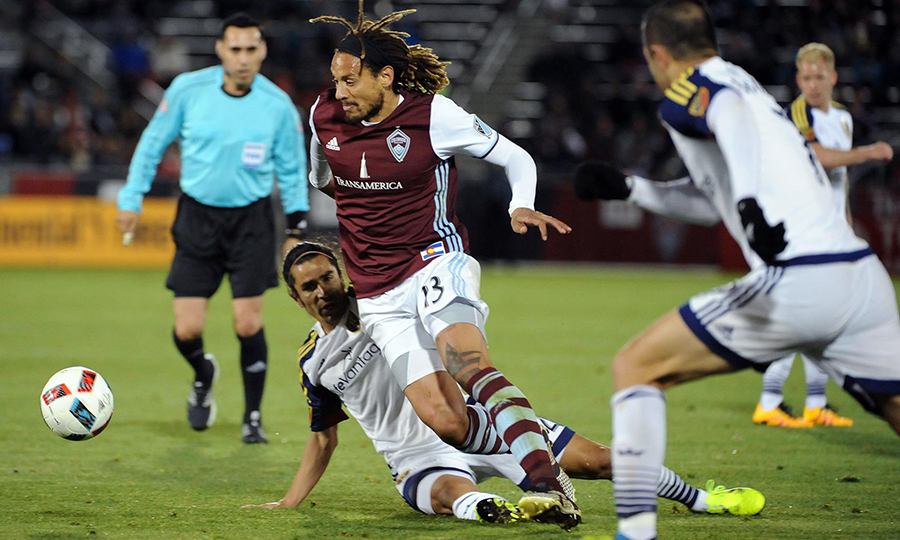 We live in very strange times. Jermaine Jones is a goal-scoring machine, the Rapids are first in the Western Conference, and Toronto FC has climbed to second in the Eastern Conference. Below are short recaps from all the weekend’s action.

LA Galaxy (4) vs. New England Revolution (2) – Watch Highlights
The scoreline doesn’t indicate how close this match was as two quick goals by the Revolution in the second half erased what had been three-goal lead for the Galaxy. The Galaxy, however, weathered the storm and walked away win a 4-2 victory. Galaxy jumped out to an early lead with Robbie Keane’s goal in the 13th minute. He added a second in the 45th minute. Between his two goals, Gio Dos Santos scored again. His fifth goal in four matches. This changed in the 60th minute when Keane and Revolutions Lee Nguyen were subbed out. Revolution scored two goals, the first in the 67th minute from Kelyn Rowe and the second in the 70th minute from Juan Agudelo. The Revolution looked to have equalized the match in the 83rd minute, but Agudelo’s shot hit the crossbar and bounced out. Steven Gerrard added a late goal in the 93rd minute to close out the match.

Seattle Sounders (2) vs. San Jose Earthquakes (0) – Watch Highlights
A forgettable match for the San Jose Earthquakes who were only able to get off one shot on goal. The story in this match isn’t Clint Dempsey’s goal, but rookie Jordan Morris’ fourth goal in as many matches. He added his fourth goal in the 89th minute when he charged up the middle and placed the ball beyond the outstretched arms of San Jose goalkeeper David Bingham. One more goal for Morris and he’ll break the rookie record for consecutive games with a goal.

Colorado Rapids (1) vs. Real Salt Lake (0) – Watch Highlights
The Rapids are now the sole leader in the Western Conference following their 1-0 win over Real Salt Lake. Jermaine Jones scored his third goal in a Rapids uniform in the 47th minute. Jones has already surpassed his two-year goal tally for New England during the 2014-15 seasons. The scoreline could have been more favorable to the Rapids if not for the excellent performance from RSL goalkeeper Nick Rimando.

Toronto FC (1) vs. FC Dallas (0) – Watch Highlights
Playing at home for the first time this season and in front of 30,000 fans, Toronto FC defeated FC Dallas 1-0. Surprising, since both sides combined for 27 total shots. However, only seven were on frame. The lone goal from Tsubasa Endoh, who was assisted by Sebastian Giovinco. Toronto FC has now won 3 out of 4 matches and have climbed to second in the Eastern Conference, behind…..

Columbus Crew (4) vs. Montreal Impact (4) – Watch Highlights
The Montreal Impact, who overcame a three-goal deficit to tie the Columbus Crew 4-4. multiple players for each side had multiple goals. The Crew’s Kei Kamara scored two in the first half, while his teammate Federico Higuain added two in the second. Montreal’s Ignacio Piatti scored on either side of the half with Didier Drogba and Dominic Oduro each adding one goal in the second half. Oduro’s goal came in the 93 minute. Montreal is now top of the Eastern Conference, while FC Dallas is now on a three-match losing streak.

Vancouver Whitecaps (2) vs. Portland Timbers (1) – Watch Highlights
We said it last week. Vancouver at home is tough. Vancouver at home and wanting revenge is an even tougher opponent. The Whitecaps took care of business with two goals in the second half to earn just their second victory in seven matches. Portland’s Nat Borchers scored the opening goal in the 34th minute. At the hour-mark, Vancouver’s Masato Kudo scored the equalizer with teammate Christian Bolanos scoring the game-winning goal six minutes later.

D.C. United (0) vs. NYCFC (2) – Watch Highlights
NYCFC have won two matches in a row. That’s called a winning streak. Still something new for the second-year club looking to get things going. NYCFC scored the opening goal in the 49th minute when Tommy McNamara fed David Villa the ball in the box. Khiry Shelton added a second goal four minutes later to give NYCFC breathing room to close out the match.

Houston Dynamo (2) vs. Sporting Kansas City (0) – Watch Highlights
Houston looked lifeless going into this match. So of course they won, thus snapping a six-match losing streak. MLS is crazy and hard to predict sometimes. Giles Barnes scored the opening goal for the homeside from an Erick Torres pass. Andrew Wenger added Houston’s second goal at the end of the first half.

Orlando City (1) vs. NY Red Bulls (1) – Watch Highlights
In the first match of the weekend (Friday), Orlando City and NYRB played to a 1-1 draw. Bradley Wright-Phillips scored the opening goal in the first half and Kevin Molino equalized for Orlando in the second half.