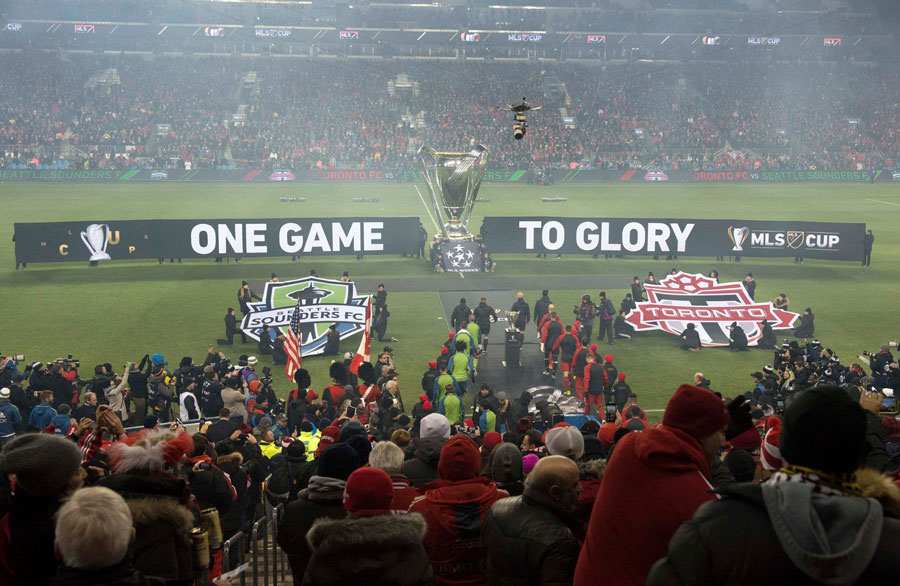 Why can’t it just be a crap match? Why do we always have to do this deep analysis of the grander meaning of a terrible game of soccer when that game of soccer occurs in MLS? Here’s why…

A team that had the epitome of a mediocre season has been crowned the league’s champion, and they are entirely worthy of owning that title. In fact, it’s rather fitting that a team like the Seattle Sounders won MLS Cup. It’s rather fitting that they won it in the absolutely dreadful, borderline unwatchable fashion in which they did.

In 34 regular season affairs, Seattle won the exact amount of games that they lost, 14. They also drew six times.

In those 34 regular season games, they scored 44 goals. They conceded just one less, 43.

Seattle registered 48 points in a season that saw them have one of the worst first halves in their existence, ultimately leading to the firing of long time Head Coach Sigi Schmid.

Brian Schmetzer took over in late July. The team engineered a stunning turnaround. They got hot at the right time and scraped their way into a playoff spot.

They went on a barnstorming postseason run all the way to their first league championship, a run that included knocking out the team with the highest regular season points total. That team, FC Dallas, under the wise tutelage of Oscar Pareja, played some of the most aesthetically pleasing soccer that the league has seen in some time while utilizing a pool of homegrown talent.

Seattle won MLS Cup while registering not a solitary shot on goal in 120+ minutes of play. Neither side in the game looked like they were able to link up more than a half dozen passes consecutively. With Seattle parking the bus, Toronto FC, playing in front of their home fans inside frigid BMO Field, looked about as threatening as bunny rabbits in knit scarves going forward.

Toronto FC and USMNT Captain Michael Bradley taking one of the weakest penalty kicks imaginable will sadly be a lasting image from the match. Seattle goalkeeper Stefan Frei made the play of the game, his sprawling save thwarting Jozy Altidore’s looping headed attempt in the game’s dying moments. That was literally the only “soccer highlight” of the entire match, a final, a “showpiece” for MLS, unless of course you include brutal kicks to the testicular region in freezing temperatures as “highlights”. Then there would have been two highlights.

There is no denying just how awful of a spectacle MLS Cup 2016 was, yet making that obvious statement still seems to ruffle so many feathers. We must try and comprehend why that is. Why does this crap final turn into a bold print damning of MLS? It could very well just be a one off. For goodness’ sake (or maybe badness’ sake), there have been crap finals since the dawn of footballing time, and even the best footballers around the globe are by no means immune to the crappiness.

Let’s just stick to recent times. Look at the last two World Cup Finals, Euro 2016 and the Copa America Centenario. Who could forget the 2003 UEFA Champions League Final, when every bad on-field stereotype of Italian soccer took over Old Trafford, with AC Milan defeating Juventus on penalties after 120 minutes of dreadful, scoreless boredom in Manchester.

Crap finals bereft of attacking prowess and flowing soccer are in many ways frighteningly routine, with teams essentially abandoning any sort of audacity or dedication to the beautiful game and instead playing not to lose. So why then is it different when MLS has one of these matches?

The answer is quite simple. All of those games listed above were tournament finals. None of them decided a domestic league champion.

We’ve all heard the old soccer saying, “the table never lies”. The late great Brian Clough was famous for saying that there is no better measurement of footballing superiority than the league table. The table never lies. It is a reflection of nothing other than reality. That’s not to say that the 2016 accomplishments of the Seattle Sounders were in any way fake. But in a playoff format, those accomplishments, and the competition as a whole are, well, cheap.

Playoffs are an American sporting construct. They have been the demise of countless “one seeds” in American sports history. They are exciting, at times enthralling, and downright spine-tingly. From the NFL to the NBA, the NHL to to MLB, playoff moments are an integral part of the drama we all love. Playoffs are often marvelous. They also have no place in deciding a league champion in the game of soccer.

Of course, there is another soccer league rather close by that adheres to the playoff style. The Mexican League converted to a playoff format in the early 1970’s. In many ways, that switch was responsible for the initial financial boom of a league that is still growing today as Liga MX. Despite the occasionally large speed-bumps the league may hit, the playoffs bring financial stability as well as increased interest from fans, especially those of mid-level sides.

Profitability was the key factor in the adoption and subsequent embracing of playoffs by team owners. The “liguilla”, as the playoffs are called in Mexico, is by far the most exciting portion of the season. It’s no different than any major American sports league.

One key difference in the Mexican soccer playoffs is that the league is structured into semester campaigns, with two seasons with separate champions in each calendar year. This means that a championship winning team will have played 23 matches in a season, including the playoffs. It is a system that still promotes mediocrity, but it’s almost as if the whole thing is just a big toss up from the beginning.

In the case of MLS, making teams play a regular season that is the exact same length as the German Bundesliga, and akin to most major European leagues in terms of matches played, and then throwing them all into a big blender of drawn out, nationally televised madness certainly creates intrigue. It could also be called cruel and disrespectful to the sport. The Supporters Shield, the prize given to the team with the best regular season record, is nothing more than the soccer equivalent of a backhanded compliment. Congratulations Dallas!

Some will say that Pareja and his FC Dallas team should have known the waters in which they swam, and maybe taken it upon themselves to not lay the biggest egg of the year in their first leg playoff match with Seattle. That is perfectly reasonable. The reality is that playoffs are the system, so poop or get off the pot.

In regard to playoffs being an American sporting construct, it should also be pointed out that in 2016, the NFL and the NBA saw final series match-ups of one-seeds from each conference/league, with Major League Baseball being a Cleveland Indians regular season win away from the same scenario when they battled the Chicago Cubs in the World Series. Gridiron football is a different beast entirely, where one-offs are necessary for a multitude of reasons, and physical and tactical dominance still often maintains, just as it did with the Denver Broncos and Carolina Panthers. As for the NBA, MLB, and even the NHL, with seven game series set-ups come far more likelihood that the best team will advance to and perhaps win the finals. It doesn’t always hold true, but it often does. And if it doesn’t, the winning team in a series has to win four games against their opponent, so they’ve definitely earned the accomplishment.

Soccer as a sport doesn’t work with either of these competitive set-ups. A seven game soccer series is just as ridiculous as a one-off. And that’s what makes international tournaments and club cup competitions so spectacular and unpredictable. The advent of cup competitions is at the root of capitalizing off the same level of excitement and intrigue we associate with “playoffs”. It’s what makes historic competitions like the FA Cup and our own U.S. Open Cup so beautiful, the potential for the lower division minnow to play its best game of soccer on the same day that the alpha dog of the top-tier plays one of its worst. However, that concept being applied to an actual league championship is as offensive to a soccer purist as the MLS Cup Final was defensive.

Seattle being crowned MLS champions in 2016 is like in 1966, when tracks from the Beatles, Beach Boys, Monkeys, and Mamas & the Papas were Grammy nominated for “Best Rock & Roll Song”, and the award went to Winchester Cathedral by The New Vaudeville Band. Sure, Eleanor Rigby and Good Vibrations were great songs, but in the record books, they pale in comparison to Winchester Cathedral, aka the 2016 Seattle Sounders of music history.

The entire competitive set-up of Major League Soccer is flawed. It’s also not going to change anytime soon, despite what the most hard-nosed tinfoil hat wearing, Twitter and keyboard warriors may tell you.

In his recent “State of the League” address, as well as a lengthy interview with ESPN’s Jeff Carlisle, MLS Commissioner Don Garber clearly stated that MLS will be constructed competitively in a “playoff format” for at least the foreseeable future, if not forever. MLS is a North American professional sports league. It will be run as such.

Now don’t get this all twisted into some damning narrative about the overall quality of play in the league. MLS is home to some wonderful soccer, technically and dramatically speaking. Say what you will about some of the shocking defending on display, but both legs of the All-Canadian semi-final between Toronto and Montreal were scintillating and unbelievably entertaining. However, the irony of perhaps the worst game of the year, 120+ minutes of unadulterated footballing excrement oozing out of television screens across the United States and Canada, being the game that decided the league’s champion… that is all too fitting to this narrative. The fact that it followed the 2015 Final between Columbus and Portland which saw a poorly played game, horrendous goalkeeping errors, and a dubious missed out-of-bounds call lead to a 2-1 victory for Portland… that just adds hilarious kerosene to a cynical blaze.

The Seattle Sounders are worthy champions. They were, as former Sounder and U.S. goalkeeper and Washington state native Kasey Keller put it, a team of destiny. They went on a piping hot streak and dug themselves out of a deep pit. They overcame adversity and fought through monumental struggles that plagued them for much of the season, not to mention doing it all without their biggest star player in Clint Dempsey. They took full advantage of a beneficial system, one that is designed for teams just like them. They won a league championship without registering a single shot on goal in the championship game. (Yes, we already went over that stat, but it bears repeating.)

It was an absolutely awful game of soccer between Toronto and Seattle. It disappointed just about everyone who watched it, apart of course from those wearing neon green. And thanks to a competitive structure that rewards mediocrity, those Sounders fans can bask in the glory of their first MLS Cup Championship, as they should.

They didn’t design the cheap system. They just fought and won.