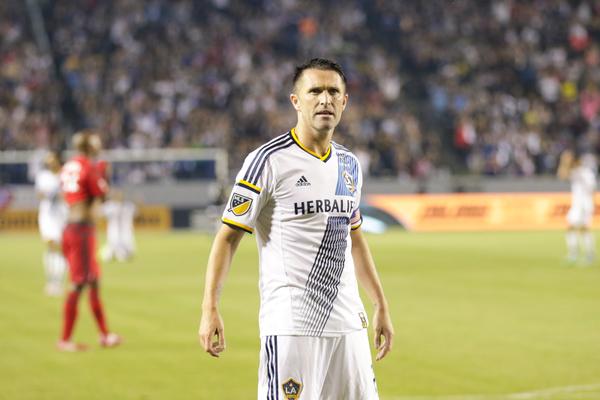 On a very eventful Independence Day, the LA Galaxy handled business against Toronto FC winning 4-0 and came away with 3 points which has them sitting in 4th place in the Western Conference.

With the Gold Cup starting up on Tuesday, 7 players from both teams were unavailable for their respective MLS sides meaning key players like Gyasi Zardes, Omar Gonzales and Michael Bradley were unable to play.

Both teams made the necessary changes and the Galaxy started with a strong line up, featuring the Inglewood youngster, Jose Villarreal who was filling in for another LA local, Gyasi Zardes. The in-form Santa Clara native Sebastian Lletget also started in the midfield along with veteran left back Robbie Rogers who completed the California trio on the left side of the field.

It did not take long for the Galaxy to expose the Toronto defense when in the 8th minute Lletget received a pass from Rogers and skillfully beat his defender and dribbled into the box. Before he got a chance to do anything with the ball, he went down in the box leading to the referee calling for a penalty kick in favor of the home team. Veteran and last season’s MVP Robbie Keane stepped up and clinically sent the ball into the top right corner of the goal. Just like that, the Galaxy were up 1-0.

The match continued on with both teams looking to grab a goal but with no luck until the 41st minute. Some good passing from Husidic and Ishizaki led to a good cross which found a open Robbie Keane who slotted the ball past the keeper to make it 2-0 right before halftime.

A special ceremony was held at halftime for a LA Galaxy’s newest signing, Steven Gerrard. He walked onto the field and gave a short speech to thank all of the fans for the support. He also gave some of the Galaxy’s most dedicated fans an early “thank you” by buying crates of beer before the match. Needless to say, fans are excited for his debut which will happen this Saturday against Club America.

The second half saw Toronto FC come out inspired and almost score a few times in the first 5 minutes of the game. The extremely dangerous attacker Sebastian Giovinco was responsible for most of the threats in those first few minutes but was thwarted by the Galaxy goalkeeper every single time. The home team did not let up in the second half and Keane was able to complete his hattrick in the 56th minute when he pounced on a sloppy pass back to the goalie and calmly scored. This effectively ended the game as a competition but Sebastian Lletget made a statement with a well taken goal in the final play of the game.

The result was an emphatic victory for the Galaxy but it was not all good news. Stefan Ishizaki announced that he would be leaving the team and returning to Sweden to be closer to his family. His one and a half years with the LA Galaxy included an MLS Cup and he will join a Swedish team in the near future.

The Galaxy’s next game will be on Saturday against Club America at the Stubhub Center.