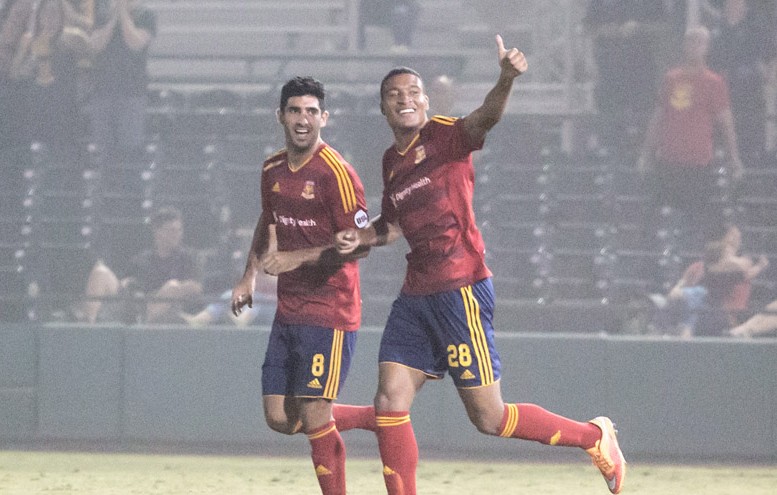 Meeting for the third and final time in the regular 2015 USL Season, Los Dos were unsuccessful in finding a win over United SC, once again falling 2-1.

As the night kicked off with lightning nearby and signs of a monsoon approaching, both clubs did their best to maintain control of the ball. Arizona United SC opened the score in the 39th minute with a tally from the club’s leading goal scorer, Long Tan.

Keeping consistent pressure on Arizona’s backline in the second half, Bryan Olivera found his first goal in a Galaxy kit scoring the equalizer in the 74th minute as goalkeeper Carl Woszczynski came off the line, giving the Uruguayan a clear shot.

United went down a man in the 80th minute after a red card was issued to Aaron Dennis for slide tackling Rafael Garcia. Scott Morrison played in a ball in the box for United in the 90th minute and, after taking several deflects, Schillo Tshuma found his first goal of the season to keep Arizona’s playoff dreams alive.

Galaxy II will have a shorter travel next week as they look to clinch a spot in the playoffs with a match at Anteater Stadium at UCI against the OC Blues FC Saturday, Sept. 5th at 7 p.m. PT.

A complete LA Galaxy II 2015 schedule can be found here. All LA Galaxy II matches will be streamed live on www.lagalaxy.com with the majority of home matches broadcast by Time Warner Cable lead announcer Joe Tutino along with Ralph Perez.