After all the rumors it is finally confirmed that Italian player Andrea Pirlo is coming to play in the MLS. At 36 years old, Pirlo knew his time playing at Juventus would be soon coming to an end after 4 years playing in “Serie A”. His fitness and conditioning at this point are not the best anymore, and his body is asking for less intensity, however, as he said, he still wants to play the game he loves.

[quote_box_center]“I won’t stop playing; I’ll go on as long as I have the same great desire to keep training every day,” Pirlo said at an interview recently, before signing the contract. “Juventus will be my last Serie A team, whatever happens. MLS could be an idea, but for the moment I don’t have anything; Juve are the only thing on my mind.”[/quote_box_center] 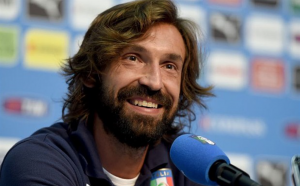 Coming to MLS to spend their last years as professional soccer players before retiring here is something many players have been doing. David Beckham was one of the pioneers of this new era, helping to boost U.S. soccer. In 2007, at the age of 32, he came to play for the LA Galaxy in a $250 million deal, and started paving the way to many others to come.

Pirlo, who has helped Italy win the World Cup in 2006, took the offer from New York City and will join the team this summer, along with Lampard and Villa who are the other 2 Designated players that the club already has. According to them this this and last spot was definitely worth the wait.

[quote_box_center]“I have been wanting this experience for a long time and now that the opportunity materialized I wanted to take it. This is a Club on the rise and shares my same hunger to achieve important results in the League. I am hoping to win. I had several opportunities to play outside of Italy, but I never had a doubt in picking New York for the enthusiasm of the people that come watch the team.” – Pirlo about coming to New York City FC.[/quote_box_center] 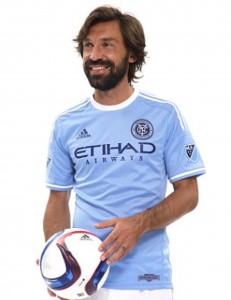 Pirlo should start with the new club on July 21st on a 18-month contract, but is supposed to have his first game on July 26th against Orlando in New York.

Pirlo’s last appearance was in the 2015 Champions league final between Juventus and Barcelona. Despite his effort, unfortunately Pirlo and Juventus lost to the opponent team by 3-1.

“We have said from the outset that the right player for the third DP slot was worth waiting for,” New York City FC head coach Jason Kreis said in a club statement. “Nobody could question that in Pirlo, we are bringing one of the best in the world and one of the finest players to come to MLS. Like David Villa, his final game in MLS was the Champions League final, which demonstrates a player competing at the highest level of our sport.”