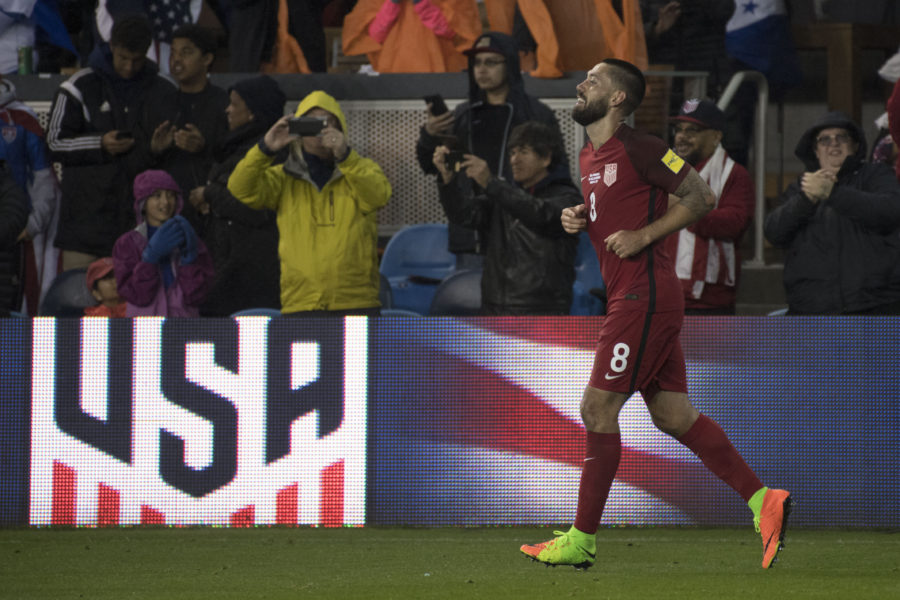 Generations Intertwined: Dempsey and Pulisic lead US to historic rout of Honduras

When Clint Dempsey scored his first goal for the United States Men’s National Team, Christian Pulisic was all of six years old. On Friday night in San Jose, it looked like Dempsey and Pulisic had been teammates for a decade, displaying a level of cohesion and fluidity as an attacking duo that was truly a marvel to behold.

The U.S. defeated Honduras 6-0 in front of 17,729 fans at a rain soaked Avaya Stadium, the Yanks picking up their first points in three CONCACAF World Cup Qualifying matches in the hexagonal round.

Dempsey took Man of the Match honors, netting a sensational hat-trick that was capped off by a free-kick in the 54th minute, the goal that made the score 6-0. Dempsey’s first and second tallies on the night, the third and fifth for the U.S. team, were assisted by Pulisic, who nabbed a goal himself and an incredible total of three assists on the night.

“Clint’s an easy guy to play with,” Pulisic said with a grin post-game. “We’re having a lot of fun with this team and we’re enjoying every minute.” 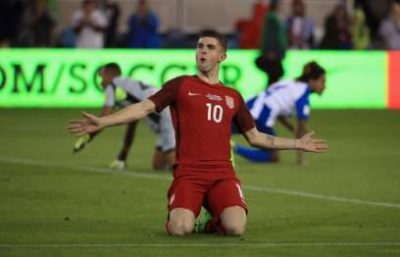 (Pulisic in full power slide glory after making the score 4-0.)

With his goal, which came just fifteen seconds into the 2nd half, Pulisic became the youngest player to ever score in the final round of CONCACAF World Cup Qualifying. At 18 years of age, the hype and hope surrounding the nation’s most promising young talent is being met with performances akin to a full-grown veteran leader on the pitch.

After a 2016 that was filled with injury and some worrisome health issues, the 34 year-old Dempsey made an emphatic statement to the world on Friday night. Playing in his first international match in nine months, the man affectionately known as Deuce marked his return to the national team stage with one of his finest ever performances in a U.S. shirt.

“Clint was damn good tonight,” U.S. Manager Bruce Arena said of his three goal hero. “Nothing he does surprises me. He’s still got a lot to give this team.”

Friday was the first competitive match of the post-Jurgen Klinsmann era, the former U.S. Manager getting the sack after the Americans were thumped 4-0 by Costa Rica in November. That result, combined with a 2-1 home loss to arch-rivals Mexico four days prior, saw the U.S. sitting in the cellar of the hexagonal table.

The return of Bruce Arena to the managerial role was met with mixed feelings from fans and media alike around the American Soccer landscape. Three matches into his second tenure with the national team, and the U.S. have won two and drawn one while not conceding a single goal. Of those three games, the only result that truly matters is the one Arena’s side picked up on Friday, a win that certainly did its part to get the team back on track as they continue their qualification effort for Russia 2018.

“At the start of the day, we were six points back of first place,” Arena said. “With our win and the way the other results went, now we’re four points off first place. So we’re making progress. When I look at this hexagonal right now, I think this is gonna be a knock down, drag out kind of affair all the way until October.”

The U.S. got off to a flying start against Honduras, Sebastian Lletget tapping home from close range in the 5th minute after Pulisic had his attempt parried by Honduran goalkeeper Donis Escober.

It seemed fitting, almost poetic, that the first goal of the first World Cup Qualifier held in the Bay Area in over 20 years should be scored by a Bay Area native, Lletget a proud San Franciscan at heart. Unfortunately for the LA Galaxy midfielder, his night was to be short lived. Honduras’ Ever Alvarado committed a nasty foul on Lletget on the stroke of fourteen minutes that left Lletget hobbled, forcing him to come off just a few minutes later. Lletget was replaced by Alejandro Bedoya, his status for the upcoming match in Panama on Tuesday still in question (Lletget was seen leaving Avaya Stadium with his right foot placed in a walking boot.)

After a decent response from Honduras after their early setback, the Americans began to truly take hold of the match around the halfway point of the first half. Midfielder and Captain Michael Bradley scored an exquisite long range goal in the 27th minute, striking a low drive with his left foot after drifting in off the right attacking side with the ball at his feet. It was Bradley’s first goal for the U.S. since the summer of 2015, that goal coming on a much less fortuitous night, a 2-1 loss to Jamaica in the Gold Cup. 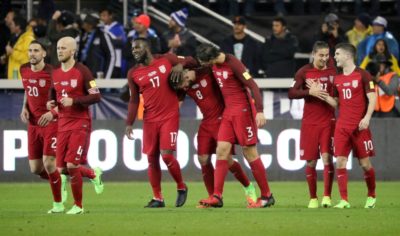 (Dempsey and Pulisic stole the show, but it was a total team effort for the U.S. on Friday night.)

It was to be a much happier outcome for Bradley and the rest of the lads in red on Friday night. Just five minutes after Bradley’s golazo, Pulisic sent Dempsey through on goal with an audacious and downright cheeky chip over the Honduran backline. Dempsey still had plenty of work to do, showing his true Texan grit as he popped the ball forward with his shoulder and scored with authority from well inside the box, on a slide with his right foot as he was being tugged down by a trailing defender.

The pass from Pulisic was delicate and smooth. The finish from Dempsey was smashing and ferocious.

With a 3-0 lead on a wet pitch, many would have expected the U.S. to come out with a relatively conservative approach in the 2nd half. Instead, the Yanks returned to the Avaya Stadium pastures with something from the opposite end of the spectrum.

Straight from the kickoff, the Americans combined to send Pulisic through on goal, the youngster scoring just fifteen seconds after the restart. The pride of Hershey, PA then sent a tantalizing through ball to Dempsey four minutes later, one of the finest moments the two shared all night. Dempsey took a touch around Escober before slipping the ball over the line from an acute angle to make the score 5-0, Deuce looking back to Pulisic with a bright smile amid celebratory chaos inside Avaya Stadium.

Dempsey wasn’t done. In the 54th minute, he let loose with one of the finest free-kicks in recent memory from a U.S. player, his bending and knuckling effort giving the sympathetic character that was Escober no chance to stop.

With the goal, Dempsey became the first U.S. player to net a hat-trick in World Cup Qualifying since a 19 year-old Jozy Altidore scored three in a 3-0 win over Trinidad & Tobago in Nashville in 2009.

Arena was asked about what the communication between he and his team before the opening whistle and during the half-time break, early scoring being a theme on the night including the almost unbelievable total of three goals in nine minutes to start the 2nd half.

“Before the game, I just told the guys, something to the effect of, first tackle, first shot, first goal. I think I actually have that as a copyright for a t-shirt.”

“Honestly though, I was blown away with how we came out in that 2nd half.”

Never one to get too carried away with one result, no matter how flattering the scoreline, Arena had some candid words on areas where he wants the team to improve.

“There were some times in the first half where they got in behind us and sent some dangerous crosses in,” the U.S. Manager said. “And some of our passing just wasn’t good enough at times tonight. We need to fix these things and make sure we play our best possible game in Panama on Tuesday. They’re a quality team.”

With the American attack firing on all cylinders, a Panama team that lost 1-0 to Trinidad & Tobago on Friday may not be shaking in their boots, but they are certainly aware of the red-hot goal-scoring threats they will be up against on Tuesday night in Panama City.

The U.S. now sit in fourth place of the six team hexagonal table, even on points with Trinidad & Tobago and Honduras beneath them, and one point behind Panama. Costa Rica occupy the second spot with six points despite losing 2-0 to Mexico at Estadio Azteca on Friday night. El Tri now sit atop the group with seven points.

With generations intertwining in attack and a backline that looks tightly organized, Arena and the U.S. team look primed for a quality performance in Panama.

Though it was a historic win for the U.S. over Honduras (their largest ever margin of victory in a hexagonal match), and while the 6-0 scoreline was a product of some downright sexy soccer, the collective focus of the American team is already onto the next piece of business on the road to Russia 2018.

Thankfully for those who aren’t playing or coaching, there exists the ability to relive all six goals and every last raindrop from March 24th, 2017 in San Jose.