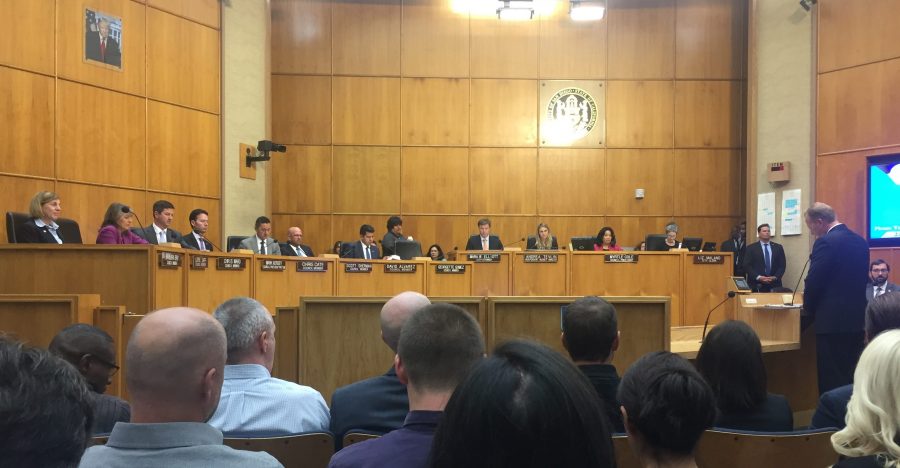 Down But Not Out – SoccerCity Rallies After Disappointing First Half

Right now SoccerCity fans in San Diego must feel like they’re down 2-0 at halftime in the first leg of the semi-final of MLS Expansion Cup 2017 after the San Diego City Council voted 8-1 Monday night to approve the Annual Budget for Fiscal year 2018, beginning July 1.

Going into the Budget Meeting, the atmosphere in the camp was positive. The Mayor had already allocated $5 million dollars of his proposed budget to funding a special election in November of 2017, and Monday’s budget meeting had the feel of playing the first leg away from home, with the return leg set for June 19th when City Council is scheduled to decide what to do with the SoccerCity SD proposal backed by 112,000 signatures.

The council warmed up with several reports of various audit findings, and other agenda items, with members of the public coming forward to weigh in with their statements before each agenda item was voted on.

Finally, after hours of procedural process, the game we came to play kicked off with Agenda ITEM-201: Approval of the FY 2018 Budget. There were 204 individuals who came to make comments, and while not all waited around to speak, the messages from civilians both for and against the budget ran for nearly two hours. Two teams probing each other’s defenses, looking for an opening.

Then Budget Chairwoman Barbara Bry broke the deadlock when she motioned to approve the budget, with one amendment – striking the money reserved for the special election, and redistributing the funds to other projects across the various districts of the city. 1-0. In many ways it was a lovely goal. Funding was reallocated to several other important areas, including an ailing police force, restoration of buildings in Barrio Logan and funding for the Arts.

Like a player scoring against their former team and refusing to celebrate, Bry attempted to excuse herself by relating a story about how both her two daughters grew up playing soccer in San Diego, and that just the day before, she herself was kicking a ball around the front yard with her grandson.

Apologetic or not, the goal counts.

The second goal was scored by Chris Ward who gleefully tapped home when he seconded the motion to amend the budget. There was no remorse in it as the Councilman reeled off a number of reasons he just didn’t see fit to fund an election for a Convention Center expansion that would be “dead on arrival” and a soccer project he projected clear disdain for.

Councilman Scott Sherman made a valiant effort to redress the balance, arguing for action and in favor of the election that could finally affect some change to the stagnant San Diego landscape that we’ve been stymied in for so long. At one point Sherman went so far as to ask when the next special election would have to be called for a city councilman who resigned before his term came to an end. Crossbar. Raised eyebrows and hearts in mouths.

Finally, the vote was called. 8-1 in favor of the new budget. Halftime.

In one of those ever-uncomfortable halftime interviews, the Mayor has promised the second half will be different when he issued a statement late Monday night.

“A City Council majority is supporting the unprecedented step of blocking a public election by stripping funding from the budget. This short-sighted move results in denying the public a vote and getting nothing accomplished for our city.

The City Council majority wants to make San Diegans wait for more road repairs, wait to address the homeless crisis, wait to bring back tourism jobs, and jeopardize a chance to get a major league sports franchise.

I intend to use my veto authority to restore the special election funding, while still retaining the added funding for our police, so the City Council can take an up-or-down vote on these urgent ballot measures.

The City Council should not ignore these time-sensitive issues – and give San Diegans the opportunity to vote this year.”

So what now? What do we the SoccerCitizens of San Diego do?

In the immediate aftermath of the meeting, Nick Stone, Spokesperson for the SoccerCity project issued a rallying cry.

“What we just heard is that its possible to add this all back into the budget,” said Stone. “If that plays out (the Mayor’s veto option), then this becomes a June 19th discussion. And it is CRITICALLY important that as many people as possible come to that meeting on the 19th to express their support for SoccerCity.”

There is certainly a lot to unpack here, and for those of us who are learning the inner workings of political machinations on the fly, the future is no clearer than it was before. City Attorney Mara Elliot clarified one crucial question before the meeting was adjourned. According to the City Charter, the Mayor has the authority to veto or amend the the budget “however he likes” and that in the event of a Mayoral veto, City Council will require a 6-3 vote to overturn his veto.

Mayor Faulconer appears to be aware of this stipulation as well. At the tail end of the statement released on Monday night, the Mayor closed with one last quip.

“The City Council voted to approve the overall $3.6 billion budget, but four Councilmembers – Chris Cate, Mark Kersey, Scott Sherman and Lorie Zapf – expressed their strong support for funding the special election. The City Charter requires a supermajority of the City Council – six of nine votes – to override a mayoral veto.”

Is there time for an away goal in the second half? Methinks so.