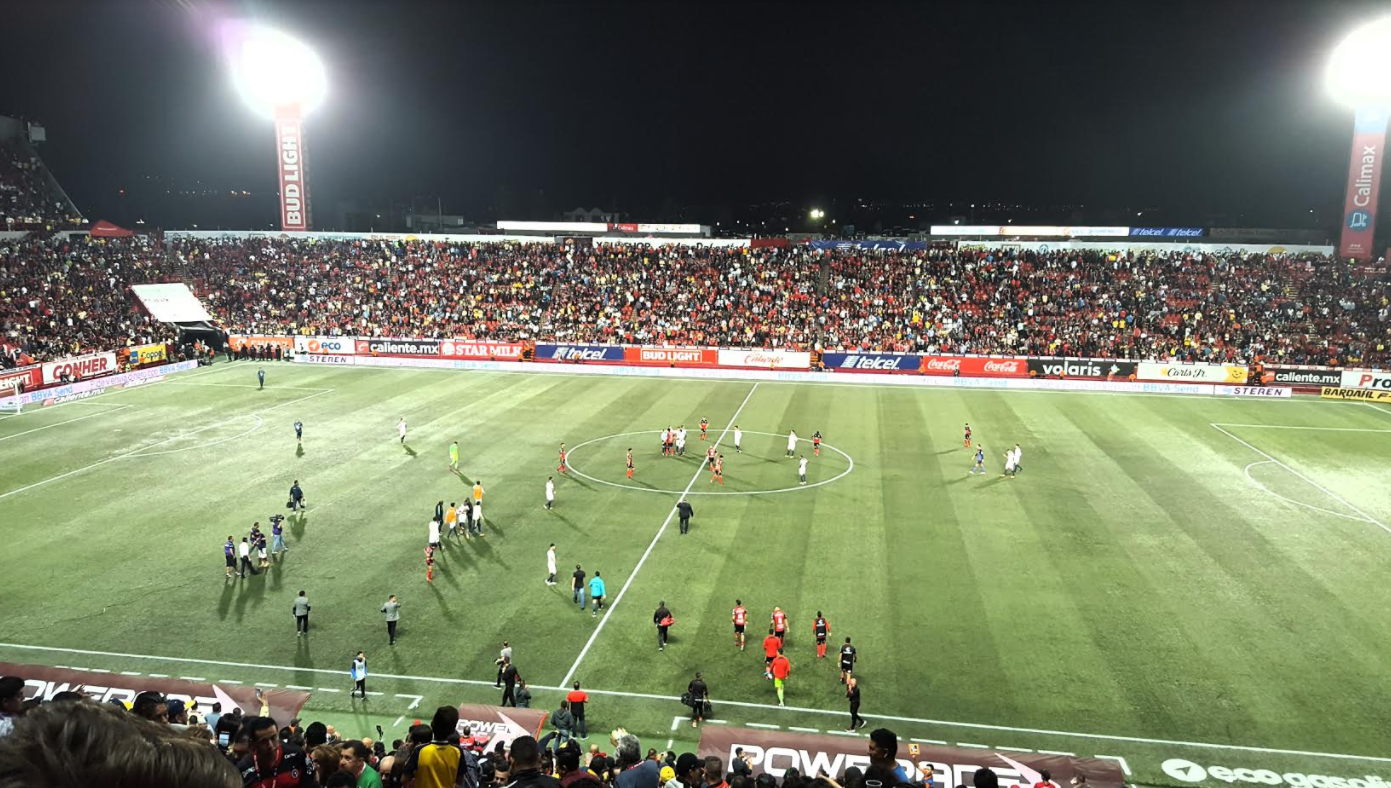 Don’t let the scoreline fool you, Friday night’s 1-1 draw at the Estadio Caliente was one of the most exciting games of the season for Xolos.

After missing a penalty and allowing a goal in the 1st half, Tijuana roared back with an eager and dynamic attack during the remainder of the match. Boosted by a one-man advantage after America’s Miguel Samudio earned a red in the 58th minute, Xolos responded with an equalizer from Miller Bolaños nine minutes later.

Unsatisfied with a potential draw, Tijuana continued to increase pressure on the visiting side that started to look far less confident. That said, goalkeeper Agustin Marchesin proved to be a wall in net for America. Along with the penalty stop in the first half, the Argentine was near-perfect with his seven saves for Las Aguilas.

Xolos fans were constantly on the edge of their seats with each promising opportunity in the second half, but once Damian Musto earned a red in the 88th minute, a draw was all but secured.

1. Bolaños immediately made an impact in his debut

Bolaños only needed four minutes to score his first goal with Xolos. After entering as a substitute in the second half for Michael Orozco, the 27-year-old Ecuadorian quickly found Tijuana’s equalizer in the 67th minute.

Regardless of his goal, Bolaños had a strong cameo appearance with his proactive passing and two shots on target. Given more time, it’s exciting to think of what else the striker might have been able to provide for Tijuana.

However, Bolaños’ strong performance might prove to be more of a curse than a blessing for manager Eduardo “Chacho” Coudet.

2. Too much of a good thing? Tijuana now has a variety of attacking options

A few weeks ago, it looked like a starting duo of Gustavo Bou and Luis Angel Mendoza was perfect for Coudet. While Bou took charge in a more traditional No. 9 role, Mendoza connected well with his fellow striker by covering plenty of ground.

Then, Juan Iturbe and Bolaños were added in early September.

Iturbe’s talents are worthy of a starting role alongside Bou, but on Friday, Bolaños also showcased an immense amount of hunger in his high-pressing role. All that said, it’s difficult to ignore the brilliant form that Mendoza has been on since August. So, how do you make room for all four? Which one should be benched?

Ideally, if Coudet is hoping for a very aggressive approach, the manager should aim to keep a Bou-Iturbe partnership up top and move Bolaños in one of the two attack-minded midfielder positions. Unfortunately for Mendoza, that probably means that the Mexican will only emerge as a late impact substitute.

Either way, it’s going to be interesting to not only see how Coudet will change his system, but also if it might hinder Tijuana’s momentum.

3. Despite the lack of a win, Friday night was another step in the right direction for Xolos

Following the draw, Tijuana has now extended its undefeated streak in the Apertura to six matches. Xolos have pushed away most of the worries from the beginning of the season, and with a spot guaranteed in the knockout round of the Copa MX as well, it’s definitely a good time to be a Tijuana fan.

Xolos were unlucky on Friday night, and were it not for a brilliant performance from Marchesin, the team could have potentially finished the weekend at second place. Win, draw or loss, Tijuana looked like a playoff-worthy squad against America.

This recognition should probably go to Musto, but after his red, I’m giving this one to Malcorra.

Once again, the winger took risks with thrilling runs that regularly threatened America’s backline. Malcorra was tireless in the midfield and was also a surprising source of numerous tackles that helped regain possession. The veteran has not taken his new role as captain lightly, and it has shown with his perseverance on the field.